Tuesday’s vote in the Israeli election was the country’s second in just five months. The September election has been seen as a referendum on Benjamin Netanyahu’s last 10 years in office and was a showdown between his Likud party and main challenger, Benny Gantz’s Blue and White. In the 120-seat Knesset, Israel’s parliament, a 61-seat majority is needed to form a government.

Who won the Israeli election?

Mr Netanyahu and his main challenger Benny Gantz are neck and neck in the country’s second national election this year.

Neither party, even with likely coalition partners, has a clear majority and the leaders could be set to face a long period of negotiations once again.

Exit polls following the second Israeli election in five months suggested the result was too close to call.

Israel election results: Exit polls suggest the result is too close to call

In a speech to supporters on Wednesday morning, Mr Gantz said he would seek to form a unity government with his political opponents and called on them to meet with his to form a better government for all citizens.

He said: “It looks like for the second time, the citizens of Israel gave their trust to us.”

Mr Netanyahu told supporters on Wednesday morning: “In the coming days, we will enter into negotiations to establish a strong Zionist government and to prevent a dangerous anti-Zionist government.”

The “anti-Zionist” reference was directed at Israel’s Arab parties, with exit polls showing they could become the third-largest force in parliament.

Benjamin Netanyahu will continue on as incumbent Prime Minister, but he will have no simple route to government.

If the polls are correct, the figures put him in an even weaker position than after April’s election. 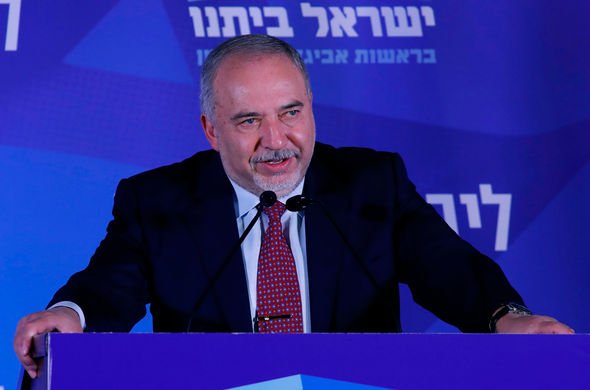 Israel election results: Avigdor Lieberman could be crucial in deciding who takes office

Mr Lieberman, leader of the Israel Beitenu party, could be crucial in deciding who takes office.

In the Knesset, a 61-seat majority is needed for form government.

Following April’s election Mr Lieberman prevented Mr Natanyahu from forming a coalition because he refused to back down over a long-standing dispute with religious parties over a bill governing exemptions from military service for ultra-Orthodox young men.

On Tuesday night, he said: “We only have one option. A broad, liberal, national government made up of Yisrael Beiteinu, Likud and Blue and White.”

But opposition groups have vowed not to sit in a government with Mr Netanyahu as leader of Likud.

If the final results prove to be inconclusive, it will be up to President Reuven Rivlin to decide who gets the mandate to try to form government.

The chosen candidate will have 28 days to so, with a possible extension of no more than a fortnight.

Other possibilities could also play out, including a third election.

Muhammad Buhari Childhood Biography, Family & Facts
QAnon: Explaining Internet Conspiracy Theory at Trump Rally
Why Donald Trump’s latest government shutdown threat matters
Find out the meaning and everything about ‘Brexit’
The Most Famous Swedish People in History
ASAP Rocky has been found guilty by a court