Kim was the son of parents who fled to Manchuria during his childhood to escape the Japanese rule of Korea. He attended elementary school in Manchuria and, while still a student, joined a communist youth organization. 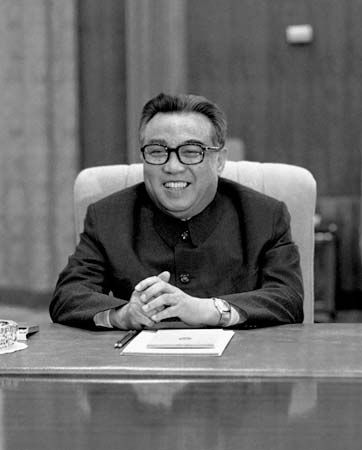 Kim was noticed by the Soviet military authorities, who sent him to the Soviet Union for military and political training. There he joined the local Communist Party.

Kim Il-sung was born on April 15, 1912, in Mangyondae, near Pyongyang, Korea, and went on to become a guerrilla fighter against Japanese occupation. Kim also fought with the Soviet army during World War II and returned to his home region to become premier of North Korea, soon setting in motion the Korean War.

Kim Il-sung was born Kim Song-ju in Mangyondae, near Pyongyang, the present-day capital of North Korea, on April 15, 1912. His parents took the family to Manchuria in the 1920s to flee the Japanese occupation of Korea.

During the 1930s, Kim, who mastered Chinese, would become a Korean freedom fighter, working against the Japanese and taking the name Il-sung in honor of a famed guerilla fighter. Kim eventually relocated to the Soviet Union for special training, where he joined the country’s Communist Party.

Kim remained in the Soviet Union from 1940 until the end of World War II, during which time he helmed a unit within the Soviet army. Kim and his first wife, Kim Jong Suk, had their son, Kim Jong Il, during this period as well.

The Korean War
After an absence of two decades, Kim returned to Korea in 1945, with the country divided as the Soviets came to power in the North while the southern half of the country became allied with the United States. Kim set up shop as chairman of the People’s Committee of North Korea, the regional communist group later to be known as the Korean Workers Party. In 1948, the Democratic People’s Republic of Korea was founded, with Kim as its premier. In the summer of 1950—after strategizing and convincing his initially skeptical allies Joseph Stalin and Mao Tse-tung of his plan—Kim led an invasion into the south looking to unify the country under northern control, thereby initiating the Korean War.

American and additional United Nations military forces got involved in the conflict, with casualties from all sides, including civilian deaths, eventually reaching 1 million. The war ceased at a stalemate with a signed armistice in July 1953.

During World War II, Kim led a Korean contingent as a major in the Soviet army. After the Japanese surrender in 1945, Korea was effectively divided between a Soviet-occupied northern half and a U.S.-supported southern half. At this time Kim returned with other Soviet-trained Koreans to establish a communist provisional government under Soviet auspices in what would become North Korea.

He became the first premier of the newly formed Democratic People’s Republic of Korea in 1948, and in 1949 he became chairman of the Korean Workers’ (communist) Party.

Hoping to reunify Korea by force, Kim launched an invasion of South Korea in 1950, thereby igniting the Korean War. His attempt to extend his rule there was repelled by U.S. troops and other UN forces, however, and it was only through massive Chinese support that he was able to repel a subsequent invasion of North Korea by UN forces. The Korean War ended in a stalemate in 1953.

As head of state, Kim crushed the remaining domestic opposition and eliminated his last rivals for power within the Korean Workers’ Party. He became his country’s absolute ruler and set about transforming North Korea into an austere, militaristic, and highly regimented society devoted to the twin goals of industrialization and the reunification of the Korean peninsula under North Korean rule.

Kim introduced a philosophy of juche, or “self-reliance,” under which North Korea tried to develop its economy with little or no help from foreign countries.

North Korea’s state-run economy grew rapidly in the 1950s and ’60s but eventually stagnated, with shortages of food occurring by the early ’90s. The omnipresent personality cult sponsored by Kim was part of a highly effective propaganda system that enabled him to rule unchallenged for 46 years over one of the world’s most isolated and repressive societies.

In his foreign policy he cultivated close ties with both the Soviet Union and China and remained consistently hostile to South Korea and the United States. While retaining control of the Korean Workers’ Party, Kim relinquished the office of premier and was elected president of North Korea in December 1972. In 1980 he raised his eldest son, Kim Jong Il, to high posts in the party and the military, in effect designating the younger Kim as his heir.

The dissolution of the Soviet Union in the early 1990s left China as North Korea’s sole major ally, and China cultivated more cordial relations with South Korea. Meanwhile, North Korean policy toward the South alternated between provocation and overtures of peace throughout the 1980s and early 1990s.

Relations improved somewhat with Seoul’s hosting of the Olympic Games in 1988, to which the North sent a team of athletes. In 1991 the two countries were simultaneously admitted to the United Nations, and a series of prime-ministerial talks produced two agreements between North and South Korea: one that pledged nonaggression, reconciliation, exchanges, and cooperation, and a joint declaration on the denuclearization of the Korean peninsula.

The agreements went into effect in February 1992, although little of substance came of them, especially after the North became embroiled in controversy over its nuclear program and suspended all contacts with the South in early 1993.

South Korean Pres. Kim Young-Sam was scheduled to travel to P’yŏngyang in July 1994 for an unprecedented summit between the two Korean leaders, but Kim Il-Sung died before the meeting could take place.

Kim Jong Il ascended to power after his father’s death, and, in the revised constitution that was promulgated in 1998, the office of president was written out and the elder Kim was written in as “eternal president of the republic.”

As head of state, Kim continued to have an agitative relationship with South Korea, with North Korea becoming known as a highly controlled, oppressive country whose people were allowed no contact with the West. Under a propaganda-based social fabric, Kim aimed to foster the concept of economic self-reliance and came to be known as “Great Leader.

” He was elected president of the country in late 1972, taking on a domestic policy that focused on militarization and industrialization. There were also hints of more peaceful relations with South Korea in the form of the Red Cross Talks.

At shortly after noon, the Korean Central News Agency, the country’s official news organization, issued a seven-page announcement of Mr. Kim’s death, which said that he would be remembered as a man capable of “creating something from nothing.”

“He turned our country, where age-old backwardness and poverty had prevailed, into a powerful Socialist country, independent, self-supporting and self-reliant,” the statement said. It called him the “sun of the nation.”

Mr. Kim, who is revered throughout the country as the “Great Leader,” is reported to have collapsed with a heart attack sometime on Thursday. It said his son and heir apparent, Kim Jong Il, would direct the funeral of his father.

Mr. Kim’s death just hours before the negotiations with the United States began, seems certain to raise questions over whether he actually died of natural causes.

Mr. Kim was also scheduled to conduct a first summit meeting with South Korea’s President, Kim Young Sam, in Pyongyang, the North’s capital, on July 25. It would have been the first such summit since the division of the Korean Peninsula.

North Korea’s fortunes declined during the ’70s as South Korea prospered, and foreign aid from the Soviet Union ceased when the Cold War came to a close. With concerns about North Korea’s nuclear program mounting, former U.S. president Jimmy Carter met with Kim in 1994 to talk about the possibility of aid from the West in exchange for a halt in the country’s weapons program.

Kim had also made plans for a historical meeting with South Korean leader Kim Young-Sam. Kim died in Pyongyang on July 8, 1994, allegedly from a heart condition, before the summit could take place.

Kim Il-sung’s son, Jong Il, took over leadership of the country until his death in 2011. Jong Il was then succeeded by his own son, Kim Jong-un.